One of my biggest goals for my classroom has been to involve my students in as much of what goes on in our classroom as possible. As I’ve been getting my bearings this year, it has become obvious how much easier it is to not let students have a lot of voice in determining what goes on in our classroom. It’s much simpler if I just decide what we’re going to do and what it’s going to look like — and some days, it’s a real struggle to keep seeking their input.

But, their input has been so rich — once they got over the shock of being asked to provide it, that is. My students have had a direct say in some changes that I’ve made to our daily routines and I’ve noticed their buy-in has increased because of it. I’ve also worked on trying to give them more choice in how they demonstrate their understanding, what components ought to be included in their final products, and what activities they want to work on while we do centers. Of course, it hasn’t gone perfectly and I still feel there are some areas where I don’t know how to incorporate greater student choice. (My current area of focus is spelling — I want to enhance student choice but without the logistical nightmare of having 15 students all choosing entirely different words to learn. My best idea is to have the students brainstorm words they’d like to learn and then using those. If you have any ideas, let me know!)

Anyway, two weeks ago, I took the biggest — and riskiest — step yet in incorporating student choice in our classroom. After looking over the curriculum topics, I am confident we’ll have covered most of them by May, so I turned over control for deciding what we’ll study in May entirely to my students. I explained this to my students and reveled in the looks on their faces as their notions of teacher as curriculum-chooser shattered in an instant. I wrote on a piece of chart paper “Our Unit Ideas” and then left the paper easily accessible on our easel for two weeks.

My first observation upon doing this was amazement at the ideas that my students had for units. There were no inappropriate or silly ideas from my second graders — in fact, many of their topics were so academic (states, the presidents, other languages), that I was quite taken aback at their seriousness. You can see all of their ideas below: 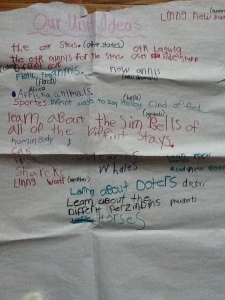 After the brainstorming period ended, I drew up ballots where students each voted for their top three unit choices. There was a tie between human body and volcanoes. Interestingly, when I offered students the option to do mini-units on both, they were opposed to the idea. In our revote, volcanoes came out on top. (Luckily for me — I took a course entirely on volcanoes while I was in college, so things couldn’t have worked out better!)

The next steps in this process are for me to discuss some of the details of the unit with my second graders. I want to find out what kind of project or product they might want to create at the end of the unit and what information they want to learn about volcanoes. Working with the students on this has been so invigorating — and I am hopeful that it will lead to greatly increased student motivation when the volcanoes unit does roll around. I really cannot wait!

What do you do to incorporate student choice in your classrooms? I’d love to hear any ideas floating around out there! 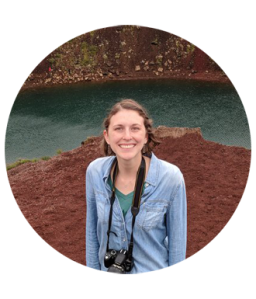 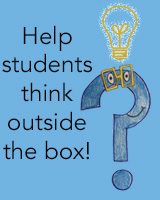